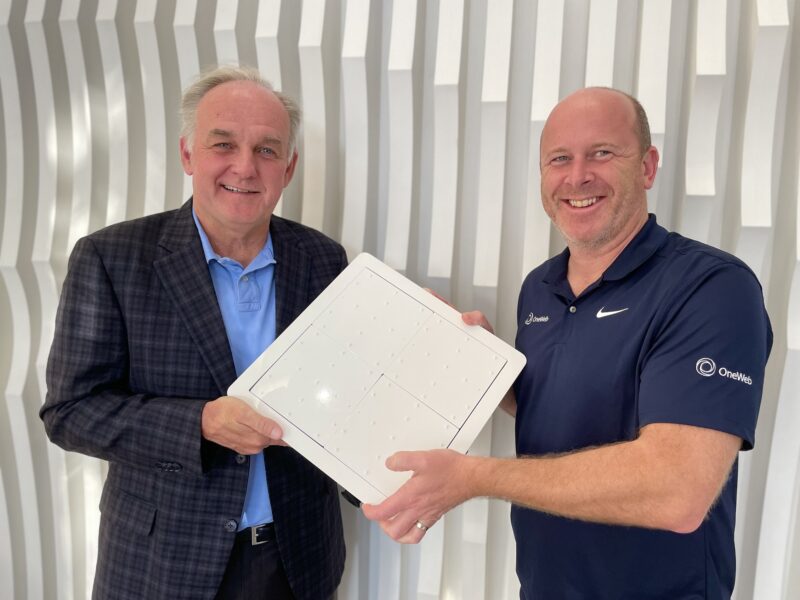 The new terminal is based on the Electronically Steered Antenna (ESA) technology developed by Ball Aerospace. OneWeb said in a Tuesday announcement that it has already undergone early lab and ground testing at GDC facilities in Fort Worth, Texas. Initial flight testing on a Boeing 777 is scheduled for the first quarter of 2022, with certification expected in early 2023.

OneWeb said the terminals have been engineered so airlines can use a hybrid Low-Earth Orbit (LEO) and Geostationary Orbit (GEO) solution, which the company expects will be a key differentiator as airlines adopt LEO connectivity.

“This agreement with GDC Advanced Technology represents a major milestone for OneWeb as we accelerate our plans to bring globally consistent and game-changing in-flight connectivity to aviation users everywhere – regardless of the size of aircraft they fly on,” said Ben Griffin, vice president of Mobility at OneWeb.

The terminal will initially be available in two sizes, a traditional ARINC 791 for larger commercial airliners, and a smaller installation for regional jets, single aisle and business aviation platforms. This agreement includes development of installation certification for several aircraft types, and pursuit of line-fit offers with major airframe manufacturers.

OneWeb is pursuing a number of user terminals developed with industry partners. Intellian Technologies is working on two terminals for OneWeb, and Satixfy has also been selected to build an IFC terminal.